Athos vs. Accelerometer Based Tracking

Monitoring the training loads that athletes experience in training sessions and during competitive events has become a major focus in professional sports. Interest in athletic load has been gaining attention, however identifying an appropriate methodology that has the capacity to quantify and provide meaningful results is challenging [1]. Measures of training load can be categorized into either external or internal. External training load is a measure of work performed by the athletes during training and competition quantified using position-based devices (e.g. accelerometer and GPS). Internal training load is a measure of biological or physiological stress imposed on the athletes and is assessed using biological or physiological sensors (e.g. EMG-based garment, metabolic consumption device). The internal training load reflects how athletes’ physical capacity is responding to a training program, and the external load is quantified independently of the physical capacity.

External load is easily misinterpreted either during analysis or in communication to sports practitioners. A disadvantage of external load is that the interpretation from external loads could be misleading, and this becomes evident when comparing equivalent loads between individuals. For example, two individuals may traverse the same distance when running (measured with GPS), however they may experience different physiological stresses due to differences in individual physical capacities (i.e. VO2max). Therefore, decision making on player availability for training or competition based solely on external training load should be executed with caution. Internal training load directly measure the physiological stress imposed on athletes such as heart rate, blood lactate, and oxygen consumption. Moreover, current technology has advanced to allow sports scientists and performance coaches to monitor individuals’ muscle activation using ATHOS’ electromyography (EMG)-implemented garments. EMG is a commonly utilized tool in the scientific community for the assessment of muscle function that associates with motor control strategy and physical stress. In fact, it has been demonstrated that integrated EMG (iEMG) of quadriceps and hamstrings muscles are associated with oxygen consumption [2,3], suggesting that measures of internal load may be good tools for reporting individuals’ exertion.

From athletic performance and clinical perspectives, the changes in muscle activation that occur with an increased metabolic demand offer insight into training and rehabilitation strategies for healthy individuals and also those with injuries. While the correlation between iEMG of the thigh muscle and oxygen consumption is established, it is not known if the ATHOS training load quantified using EMG-implemented garments reflects this correlation. The purpose of this study was to investigate the feasibility of implementing ATHOS EMG-based training load as well as current accelerometry-based external training load as a surrogate of oxygen consumption. Establishing the correlation between training loads and oxygen consumption will provide coaches with an improved method to assess athletes’ training responses.

Statistical analysis Separate Pearson’s product-moment correlations were used to determine the correlations between ATHOS and the accelerometry-based training loads and %VO2max (composite and individual data). Significance level was set at .05. 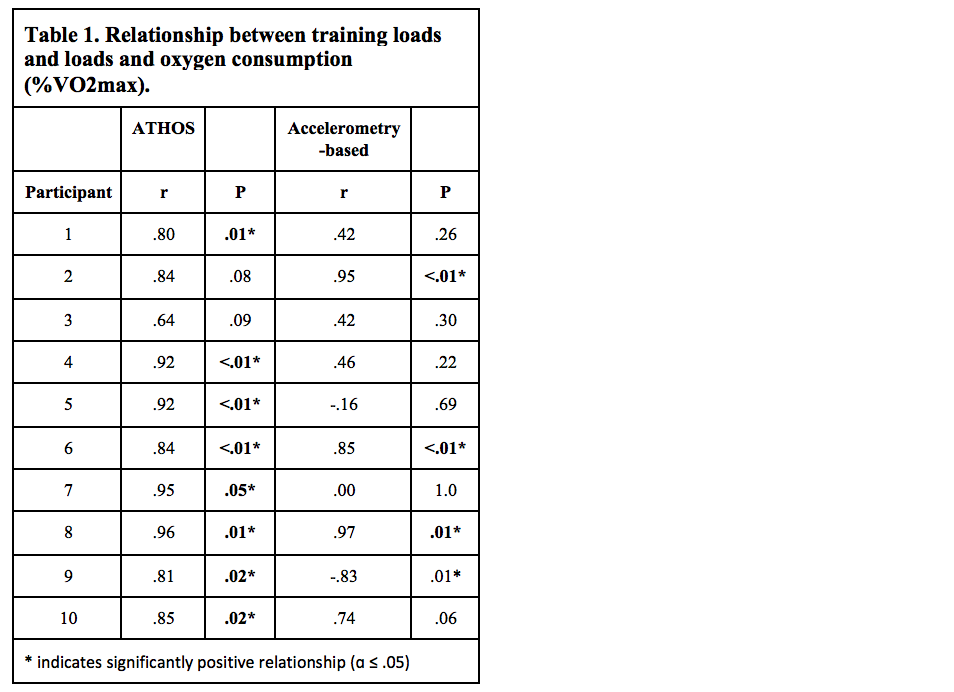 Monitoring athletes’ training load is imperative for sports practitioners to better understand athletes’ responses to training in order to develop better practice regimens and rehabilitation programs, or even a game plan. The accelerometry-based external training load does not provide the information of how individuals are responding to the external workload placed upon them during training or competition. One can imagine that athletes repeating the exact same movement will more than likely generate the same external load, but experience vastly different internal loads to achieve the same outcome, especially in the presence of fatigue. Failure to appropriately monitor the stress imposed on athletes physically and physiologically may under- or overestimate their performance, and as a result, it may lead to improper decisions made solely on the accelerometry-based training load monitoring system.